A dual diagnosis is the presence of a mental health disorder combined with a substance abuse disorder. This is also known as a co-occurring disorder and a common example would be a person who has both depression and an addiction to alcohol.

Either condition can develop first, the mental health issue or the addiction, but research shows that the combination of both disorders worsens and amplifies the symptoms of the other condition.

Bouts of sadness are a completely normal part of the human experience. It is all but impossible to remain happy, fulfilled and positive all the time, especially when life deals out sorrow from time to time.

Depression, however, is something far different from passing stints of grief or melancholy.

Often misdiagnosed, depression is a chronic illness that can last years, if left untreated. Some people suffering from the disorder are able to function and manage their responsibilities on a day-to-day basis, though not without a significant struggle.

There are others, though, who deal with debilitating symptoms. They can find themselves bedridden, isolated and unable to ask for the help they deserve.

The evidence-based, scientific and holistic approach to depression treatment at Pure Recovery addresses each person’s unique needs and challenges in recovering from this chronic illness.

From 3D brain mapping, one-on-one counseling with board certified to proper nutrition, exercise and mindfulness training, the expert care at Pure Recovery helps our clients get back to the business of living a healthy, happy and productive life.

How Many People Suffer from Depression?

Anyone can suffer from depression. The National Institute of Mental Health (NIMH) estimates that in 2017 more than 17 million adults in the United States– around 7 percent of the population – coped with at least one episode of major depression.

About 11 million of those people suffered a major depressive episode that involved severe impairment.

While public awareness about issues of depression have improved, there is still a societal stigma associated with the disorder.

Often, the perception is that people living with chronic depression should be able to pick themselves up by the “boot-straps” and get on with their lives.

That is simply not the case. Even worse, ignoring the symptoms of depression is likely to intensify the condition, often driving a person to self-medicate with drugs and alcohol.

This is a common occurrence with people who suffer from depression but fail to get proper medical treatment. They find temporary relief from alcohol or drugs and continue to until they find themselves addicted.

We’re here 24/7. Call now to speak to an Admission Specialist!

More On Our Addiction Blog

What are the Types of Depression?

As with other chronic physical and mental illnesses, not everyone experiences the same exact symptoms or has the same type of depressive disorder. 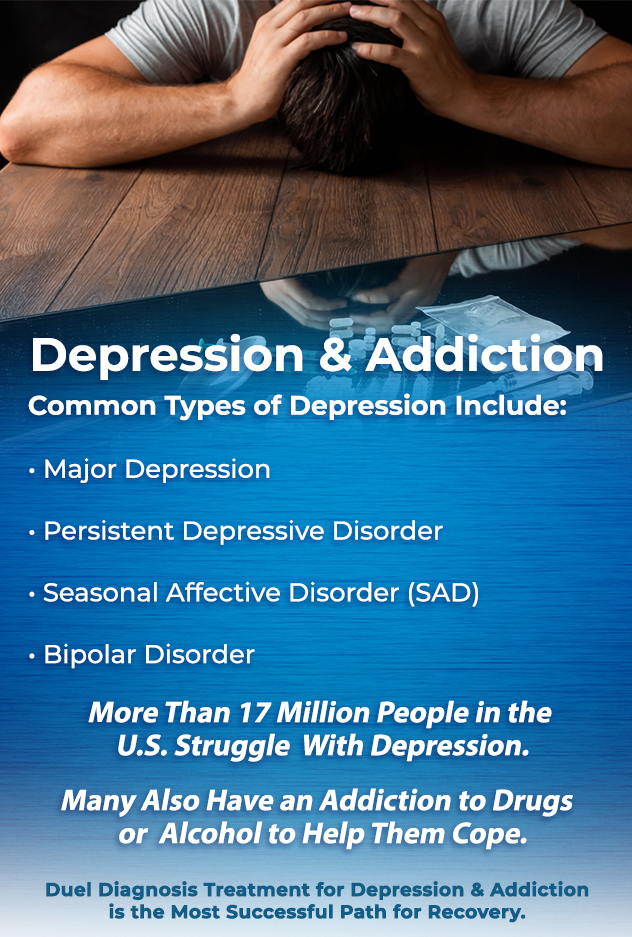 There are several depression diagnoses that can include some of the following:

What are the Symptoms of Depression?

Symptoms of depression will vary from person to person based on a number of factors, such as the type of depression an individual is suffering from, the severity and length the illness has gone untreated, as well as whether a person with depression is also battling a substance use disorder.

Some of the more common symptoms of depression can include:

How is Depression Treated?

There are a number of effective treatments for depression that can help alleviate many of the symptoms brought on by the illness. Once a person’s depression is diagnosed and treatments begin, they often start to feel relief from symptoms in just a few weeks.

Treatment for depressive disorders can include some of the following:

For many people, the most effective form of treatment for depression is a combination of prescription medication and cognitive therapy together.

But for those who have depression combined with an addiction, it’s imperative that they receive dual diagnosis treatment so that both conditions can be addressed at the same time.

Without addressing both issues simultaneously, it’s unlikely that recovery will be successful and many people run the risk of relapse.

Many treatment centers are not capable or qualified to offer dual diagnosis programs, and most only offer services for addiction or mental health, but not both. Co-occurring disorders require a team approach with staff specialized in all aspects of addiction and mental health.

We have a very high staff to client ratio comprised of doctors, therapists, and counselors who are available 24/7 to meet the needs of those in our care.

At Pure Recovery, we understand that depression and addiction can come in many forms, which is why our team of physicians and therapists customizes each client’s treatment according to their particular needs.

To find out more about our Depression and Addiction Treatment Programs in southern California, call us toll-free at (800) 714-0340.