Amen Clinics
We’ve all heard the claims that alcohol is good for your health. The media is quick to cite studies saying that a glass of wine a day reduces the risk of heart attack and that drinking two glasses of wine or beer a day has been linked to a longer life. Sounds good, but what does alcohol actually do to the brain?

When it comes to that 3-pound supercomputer in your head, the news isn’t so rosy. Brain imaging studies and other research show that alcohol can damage the brain in ways that might make you think twice the next time you’re ordering at the bar.

1. SHRINKS BRAIN VOLUME
People who drink just 1-7 drinks per week have smaller brains than nondrinkers, according to a 2008 study at Johns Hopkins that appeared in Archives of Neurology. This same research found that people have 2 or more drinks per day have even more brain shrinkage. Research on adolescents and alcohol consumption showed that those who became heavy drinkers between the ages of 12-17 compared to those who did not drink alcohol started out with less brain volume and lost even more brain volume over time. When it comes to the brain, size matters!

2. LOWERS BLOOD FLOW TO THE BRAIN
The brain scans of heavy drinkers show reduced overall blood flow to the brain. The brain uses 20% of the blood flow in your body and it is critical for healthy brain function. When levels are low it can lead to a laundry list of problems—brain fog, poor decision-making, trouble concentrating, impulsivity, and more. It’s especially important to know that low blood flow in the brain is the #1 predictor of future memory problems and Alzheimer’s disease. 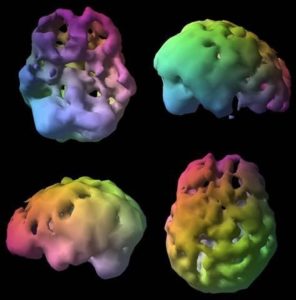 3. CAUSES ATROPHY OF THE HIPPOCAMPUS
Drinking 1-2 glasses of wine a day, which is considered “moderate” drinking, leads to atrophy in the hippocampus, according to a 30-year study of 550 women and men that was published in BMJ. The hippocampus is a critical brain region for learning and memory.

4. REDUCES THE NUMBER OF NEW BRAIN CELLS
Excessive alcohol consumption lowers the generation of new brain cells, especially in the hippocampus, according to animal research presented at Neuroscience in 2009. In the study, monkeys that consumed alcohol experienced a 58% decline in the number of new brain cells formed and a 63% reduction in the survival rate of new brain cells.

5. INCREASES THE RISK OF DEMENTIA
Compared with nondrinkers and light drinkers, moderate to heavy drinkers have a 57% higher risk of dementia. Drinking can literally make you lose your mind.

Although these findings paint a grim picture of alcohol’s impact on the brain, the effects don’t have to be permanent. You are not stuck with the brain you have. Brain imaging studies show that the brains of heavy drinkers and alcohol abusers have the potential for great improvement. Eliminating the booze and embracing a brain-healthy lifestyle are the keys to reversing alcohol’s damaging effects on the brain.

All information gathered from Amen Clinics. Retrieved from
Amen Clinics