Pure Recovery California’s advanced cognitive neuroscience treatment method represents a paradigm shift in the treatment of addiction by optimizing and healing the brain.

Our Addiction Treatment Centers in California offer comprehensive, evidence-based programs for treating the disease of addiction. Addressing each client’s unique physical and psychological needs is the key to success.

Addiction is a brain disease and is recognized as such by the worldwide medical community.

Drug and alcohol addiction has the capacity to ruin lives and families because it changes the function of the brain. In fact, brain dysfunction caused by addiction is the biggest reason why many people relapse and fail traditional methods of treatment therapy.

The brain acts as a supercomputer that controls all of our thoughts, emotions, behaviors, and every day actions. If it isn’t functioning properly, addiction can be difficult to beat.

Understanding the role the brain plays in recovery is vital for developing an individual and holistic approach to successful addiction treatment. Brain treatment during recovery is ultimately necessary for maintaining a long-lasting sobriety.

Causes of Substance Use Addiction

The toll that substance use and addiction has on individuals and their families can be devastating, but it is possible to break the cycle with addiction treatment and recovery. The underlying causes of addiction are still an intense and ongoing research subject.  Science, however, has been able to narrow some of the reasons people develop addictions.

In many cases, it’s not just one cause, but a set of overlapping neurochemical and psychological conditions that drive a person’s damaging addictive behaviors.

When a person is dealing with both a substance use disorder and a mental health issue, such as depression or anxiety, it is referred to as a dual diagnosis or co-occurring disorder. In addiction treatment, both disorders must be addressed simultaneously for successful recovery.

Common Dual Diagnosis, or Co-occurring Disorders with addiction include:

Underlying issues with brain dysfunction can complicate matters and increase the chances for relapse. Treating the brain dysfunction, mental health issues, and addiction together at the same time ensures lasting success.

We’re here 24/7. Call now to speak to an Admission Specialist!

More On Our Addiction Blog

Some of the most recognizable causes of addiction include the following:

Genetics account for about half of a person’s chances of developing the disease of addiction. Family history, along with growing up in a tumultuous environment fueled by substance abuse, can be significant risk factors.

Mental health issues, such as post-traumatic stress disorder, depression, anxiety, bipolar disorder, and even traumatic brain injury can also lead to substance abuse and addiction. It’s not uncommon for people suffering substantial psychological pain to self-medicate with drugs and alcohol, which is often a path to addiction.

Peer pressure or social influences, where alcohol or drug use is a central focus, even among adults, can lead to problematic substance use and addiction.

Prescription medication addiction is also an issue because a patient following a physician’s orders might unwittingly develop an addiction to the prescribed medications. This is especially concerning with long-term prescription painkiller use where tolerance to the drug can take hold, and requires a person to take higher doses to get the same relief. 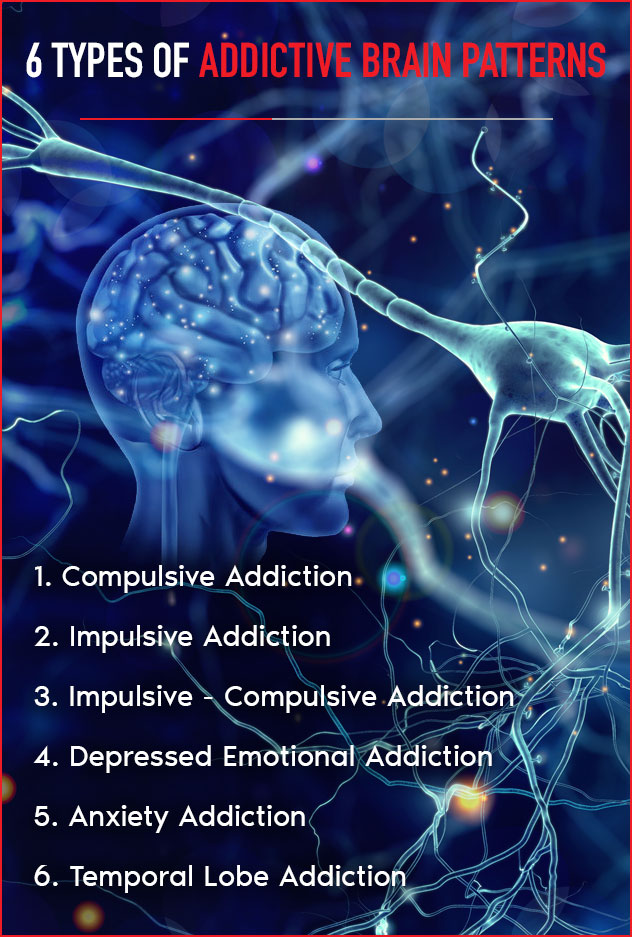 In addition to the causes of addiction, there are six types of addictive brain patterns or personality traits.

People exhibiting signs of Compulsive Addiction usually become obsessed with a singular thought and continuously act on it, such as gambling, food and eating disorders, and drug or alcohol addiction.

The obsessive behavior is the same for all addictions and the compulsion takes control of the person’s actions, behavior, and daily life.

A 3D Brain Map usually shows increased anterior cingulate gyrus activity due to low serotonin levels in the brain for those with a compulsive addiction.

For people with an Impulsive Addiction, they have a difficulty controlling “spur of the moment” impulses. 3D Brain Mapping for these people often displays diminished activity in the Prefrontal Cortex (PFC), caused by chemical imbalances like low levels of dopamine or inflammation.

The Prefrontal Cortex governs the following:

Dysfunction in the PFC area of the brain generally causes people to become easily bored, distracted, impulsive, or inattentive and is more common in men or those with ADD/ADHD.

Impulsive-Compulsive Addiction shares a combination of impulsive and compulsive traits.

Depressed Emotional Addiction many times results in people self-medicating with alcohol or drugs such as marijuana or opioids to numb the pain and emotional distress of anxiety, depression, or loneliness.

3D Brain Mapping images of people with Depressed Emotional Addiction signify increased arousal in the limbic system and a decrease in the prefrontal cortex.

People prone to Anxiety Addiction also use alcohol and drugs to self-medicate and numb the feelings of fear, anxiety, and stress. Common physical symptoms are noticeable as headaches, nausea, or nail biting.

3D Brain Mapping usually pinpoints anxiety addiction as an abundance of activity in the basal ganglia, which is caused by low levels of GABA.

Temporal Lobe Addiction usually leads to issues with anger, mood swings or moodiness, as well as memory and learning problems.

3D Brain Mapping images of people with Temporal Lobe Addiction display abnormal temporal lobe activity, either low or high. This can be caused by a variety reasons such as genetics, head injuries, toxic exposure, or infection.

The signs of drug addiction and alcoholism can range from being easily spotted in a person with an advanced addiction disorder to completely hidden by a person privately struggling with substance abuse and dependency.

There are, however, always indicators that it might be time to seek help if you, a family member or a friend is suffering from any of the following signs of addiction:

Pure Recovery understands that addiction often leaves people feeling helpless and hopeless, as if there is no other choice, but to continue drinking alcohol or using drugs.

The truth is, these feelings are symptoms of the disease of addiction, no matter what type of dependencies a person is battling. There is still hope.

Every client entering treatment at Pure Recovery California is unique and has different needs. That’s why our addiction treatment centers specialize in treating a broad spectrum of mental and physical disorders, as well as substance use and addictions such as:

Pure Recovery California’s advanced cognitive neuroscience treatment method uses an evidence-based approach to treating alcoholism and drug addiction, and relies on tested therapies that are the foundation for recovery.

Pure Recovery understands that addiction is a complex disease that stems from neurological, biological and physical causes. That’s why our programs focus on treating the underlying causes with a personalized, holistic approach that addresses a person’s entire lifestyle.

One of the first steps toward lasting recovery from addiction is detoxification. Pure Recovery California provides medically supervised detox, administered under the supervision of renowned pain management physician Joseph Cabaret MD, a specialist in addictive disorders.

When clients move safely and comfortably through detox, the transition to an integrative treatment program that addresses the whole person, from proper nutrition and exercise needs, to exploring the underlying causes of addictive behavior, is simpler and far more effective.

After detox has been completed, Pure Recovery clients transition to the formal treatment program that includes all aspects of healing and recovery.

We offer a holistic approach to treatment and focus on treating the brain through a wide range of addiction-focused therapies that help overcome physical and emotional barriers.

We take into account the specific biological, psychological, social and spiritual influences and perform neurocognitive and psychological testing to measure various aspects of brain function.

Brain 3D Mapping for Addiction Treatment is at the forefront of our success and provides our clients with the most advanced assessment of brain activity.

The Pure Recovery assessments and brain maps give our treatment team a thorough understanding of the areas of the brain to target in order to change neuroplasticity and modulation.

3D Brain Mapping is crucial for our clients to gain a better understanding of how their brains are functioning and responding to therapy through visualization.

To complement our 3D Brain Mapping technology, we utilize the following therapies:

Call us toll-free at (800) 714-0340 to find out more about our Addiction Treatment Program in southern California.