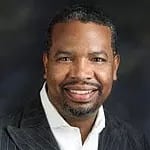 Dr. Vernon B. Williams graduated from the Inteflex Accelerated Pre-Medical/Medical program at the University of Michigan in 1992. He then completed neurology residency at The University of Maryland in Baltimore.

After residency he completed a multidisciplinary, interventional pain fellowship in the Department of Anesthesiology and Critical Care (Division of Pain Medicine) at Johns Hopkins Hospital.

He is board certified by the American Association of Psychiatry and Neurology.

Dr. Williams is an active educator on issues related to Sports Neurology and Concussion. He is the current Chair of the American Academy of Neurology Sports Neurology Section and in 2015 was appointed by Governor Brown to the California State Athletic Commission.

In addition, Dr. Williams was the Medical Director for Concussion at the 2015 Special Olympics Games.

He often serves as an expert consultant on Pain and Sports Neurologic Disorders to major television networks, radio, satellite, and print media.